on July 22, 2013
I've been making it a point to share more recorded music at storytime, to introduce parents to the many awesome kids' performers out there. We still sing traditional songs without recorded music, particularly my personal favorite "The Wheels on the Bus," but I like to promote our CD collection too.  I've included YouTube videos when possible. The kids get scarves and we boogie, sometimes we freeze dance and sometimes we are all-out dancin' fools. Here's some songs that have been big hits!

"Jump Up" by Dan Zanes (Track 1 on Family Dance) I looked up the lyrics online for this song and all of the sites had the verses out of order, so that's an FYI. I just copy and pasted them and then fixed them in Word. I think this would be a bigger hit with babies and toddlers under my current age group though. It's a bit slow for my 2's and 3's storytime kids (very rambunctious crowd), but I could see it being a hit at a baby storytime. I love this song though.

"Alabama, Mississippi" by Jim Gill (Track 5: Jim Gill Sings The Sneezing Song and Other Contagious Songs). A great song for shakers and you know how I love Jim Gill! One time he left a comment on my blog and now I'm famous by association with my best friend forever.

"The Cha Cha Slide" by DJ Casper (Track 1: Cha Cha Slide: The Original Slide Album or there is also a version on Radio Disney James 8) I was kind of kidding when I suggested this to Kendra as a replacement for her beloved Tooty Ta, but it turns out she actually does this with her preschool dance party, so I guess all bets are off and it's going on this list. There are a lot of videos on YouTube of kids doing this dance at preK or kindergarten graduations so legally, you have a precedent.

"Tooty Ta" by Dr. Jean, speaking of the devil, this one is also very popular with the preschool set. And it's very easy to perform without musical accompaniment if you're in a setting where a CD player isn't readily accessible (outdoor storytime).

"Down by the Bay" by Raffi (Track 2: Singable Songs for the Very Young)
This song always inspires a storytime mosh pit. The grandparents especially love it as many of them sang it to their kids when Raffi was big in the 70's, 80's, and '90s. Now their kids are my age and having kids of their own. You have to love a song that stretches across generations connecting them. And this one is so much fun to sing along to. I can't get this one to embed, here's the link. This version is hilarious with some classic Raffi failed rhymes.

"Shake my Sillies Out" by Raffi. (Track 13: More Singable Songs) Basically obligatory to introduce any child in your life to this one (again, can't get Raffi to embed for some reason, sorry). Raffi knows how to get down, that's what I'm saying. 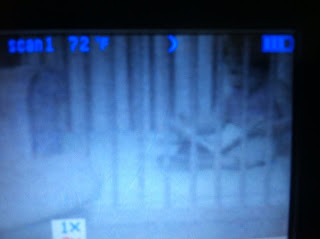 A lot of these are songs I sing with my daughter as well, especially when I'm changing her diaper, otherwise she'll jump off the changing table. But if we sing to her, she lies almost still enough that I can change her and almost get the diaper on. She loves "Hands Are For Clapping" by Jim Gill as she is a big fan of clapping and saying "YAYYYYYYY!"  Here's a picture of my daughter "reading" the board book version of "Down by the Bay" when she was supposed to be napping. I caught her on the video monitor. Future children's librarian?
I've been working on this post for weeks, and in the meantime Miss Ingrid blogged her favorite songs for storytime, there's some great stuff there so check it out. I've got a post coming tomorrow about favorite traditional songs, so stay tuned!
music storytime