"A Soup Opera" by Jim Gill (with puppets)

on January 18, 2013
If you have a group of children's librarians, and you ask them who their favorite musician for kids is... you're probably going to hear Jim Gill's name come up a lot. And for good reason! Jim's songs are interactive, which is the kids love and his voice is much more pleasant to adult ears than some other performers I won't name.

I've had the pleasure of seeing Jim perform live a few times in the Grand Rapids area and he always puts on a great show. One of the best parts is when performs his book A Soup Opera with puppets made from the illustrations in his book. I decided to make my own version using coloring pages I found on the Internet and paint stirrers. 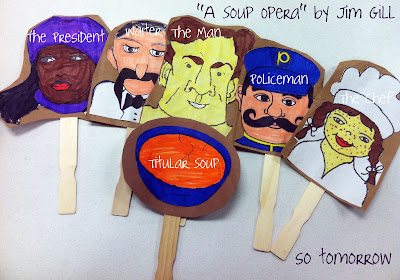 The only tricky thing about this one is making sure the voices and puppets match gender-wise. I did drop The Mayor from my version because I don't think preschoolers really grasp the different between a mayor and the president and it also goes on a little long. This show is easy to put on by yourself. I copied Jim's idea and wrapped black paper around a cardboard box. Then I cut slits into it just big enough to stick the puppets in.


Don't know this book? Here's a video of Jim acting it out live.

This also makes a great play for kids to put on at school or if you do a theater club at your library, try this one out. Nobody will forget their lines!
flannel friday puppets