on November 04, 2013
One of the things I like most about the children's department at my new job is our focus on doing programs that cover all areas of knowledge and not just literacy-based programs. We already do a science experiment extravaganza quarterly, but when we discovered the Bedtime Math program, I knew we had to try it. The goal of Bedtime Math is to provide "recreational math" opportunities for kids outside the school setting.

After getting the program supplies in the mail*, I was so excited to put this program on! It is a cinch! They send you all the supplies. All I had to do was print out some things and supply pencils.

Here's how I set up:

When the families came in, there was a table with their gift bags and name tags. Each child had a name tag and each family received a gift bag with all the goodies. I thought this might go more smoothly than passing things out one at a time as we got to them. It did not. So, next time we do this program, we will pass stuff out (as instructed to by the good people at Bedtime Math) so people will not be distracted or lost. 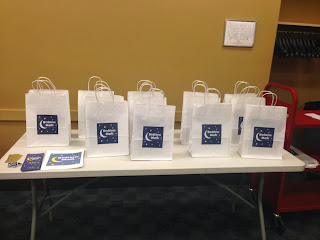 One of the activities is giant tangrams! Here's a sample I made. Note: tangrams are hard! 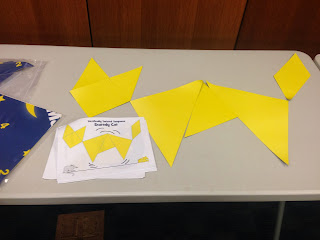 The kids also got to make (AND KEEP!) giant foam dominoes using stickers. This is a great activity. One thing I would do before releasing the kids to create their dominoes would be to play a sample game so they understand how it works. I believed more parents would know how to play this game as it was a staple of my childhood. Everybody caught on though. 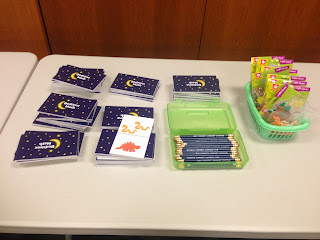 The feedback from families was tremendous! One of the moms stopped me to say they had a great time and one of the dads wanted to know when we would do it again. I'm hoping we can do another session during January or February.

As far as numbers go, the kit contains enough supplies for 20 families. I actually think that would be wayyyy too many people for this to go smoothly. Maybe if you had more than one staff person. We had 10 families register for a total of 25 people who actually attended. It was nice to see so many dads at one program! And, since Ally was wondering, yes, kids (and a parent or two) came in their jammies! The kids were ages 3-9, but 6-9 would be better so they are able to do the math.

Public librarians can order a kit for free from the Bedtime Math organization. We used the PJ Party Kit #1 for this program (tangrams and dominoes).

*Bedtime Math provided a free program kit to my library, as they will do for all U.S. public libraries per their website. I am not affiliated with them in any way.

Edited 11/5:
Some more things I meant to add: We held this program at 6:30 pm on Monday night and it lasted about 45 minutes. My branch closes at 8 pm. One word of caution is that the included stickers made a huge mess so I did have to run the vacuum after the program which I wasn't intending to do. It only took aout 5 minutes so don't let that deter you. Make sure you have plenty of garbage cans on hand as well. The foam stickers I was sent had tiny little pieces that needed to be punched out by the kids as well as the typical sticker backing.

As far as room setup, you will want as much of an empty space in the middle as you can. I lined up about 20 chairs on the perimeter of the room, as well as the tables. Then the families could play with the tangrams and make their dominoes on the floor with as much space as we could provide. My branch has a program room for children's activities (storytime, etc.) as well as a bigger room with a capacity of about 180 for performers, community events, etc. We used the bigger room for this program (as we did for pumpkin decorating and the down on the farm party, among others).
programs STEAM