on March 18, 2013
Recently my lovely sister gave my family a huge tote of hand me down toys for our daughter. Since Nora already has lots of toys, I've been going through them to see what could be used at work now or when she outgrows them. The first one I want to share is a set of Fisher Price's Peek a Blocks. These are alphabet blocks that appear to have been discontinued, which is too bad because they have a lot of potential for library use.

The blocks could be used to inspire new storytime themes (throw them all in a bag and pick one out randomly) or to introduce your Letter of the Day, especially if you use an alphabet storytime model. Also some of the blocks have actions to manipulate or make a noise when you push a button.  They each have different textures on the outsides as well.

Here's the letters I have: 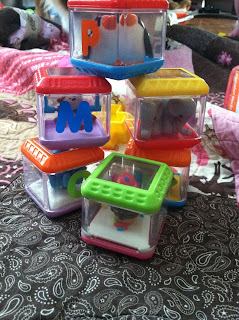 I couldn't find any online stores selling these anymore (my niece probably got these in 2009-2010), but it looks like Fisher Price still makes smaller, themed sets like these barnyard ones. They don't appear to have the letters on them though.
storytime