on January 04, 2013
You may remember that the show-stopper in our "set list" for shadow puppet show was Mother Mother I Feel Sick Send for the Doctor Quick Quick Quick, but the other full-length picture book we performed was Arthur's Nose by Marc Brown, the first book in the Arthur series. The plot centers on Arthur being embarrassed by his long aardvark nose so he decides to try on some other types of noses to see if any are a better fit. Eventually he decides he's happiest with his own nose. This whole story is made much funnier to me because Arthur's nose no longer bears any resemblance to the one in this book.

I thought it would be pretty confusing for the kids and parents if I used a puppet for the main character that looked anything like the aardvark Arthur, so I used the same image I manipulated to make the Nobody Likes Me felt board I posted previously.

Here's how I made this show (similar to the MMIFSSFTDQQQ process):

1. I drew all the noses I wanted in Paint. Some of them I didn't think would translate well to shadow puppets (koala!?) so I didn't try to make those. The zebra is my favorite.
2. I opened the nose files in Publisher and sized them to be the appropriate proportion with the generic silhouette face.
3. I printed the noses and face onto black cardstock and cut them out: 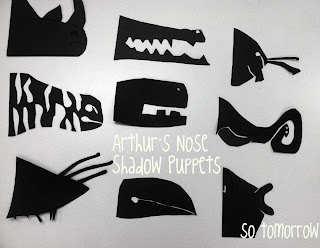 To use the overhead projector with these pieces, I simply taped the face piece onto a transparency sheet so it wouldn't move around. Then I set down the nose on top as suggested by the text.

I rewrote the text of the book to present it more easily, leaving out much from the beginning pages. I did not bother making the other characters in the story, as my version is basically an excuse to have a puppet try on funny noses.

This is also the story I sent to my First Annual Storytime Swap partner. I hope Ann likes it! See what others shared in the swap here!

And, because I had a lot of fun with this story, here's how Arthur looks with a few other noses: