on January 10, 2013
In 2011, I did a post of the most circulating books at my library. I thought it would be fun to do the same for 2012. The only difference is that the 2011 list was done following the school year calendar, and this one is calendar year.

Background: We are a public library in Michigan with about 25,000 people in and just outside of a small city. Books and audiobooks circulate for 3 weeks and can be renewed for the same amount of time if no one is on hold for them. 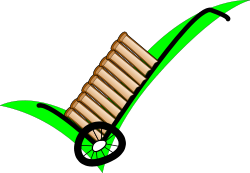 Board Books and Picture Books
All of these circulated 14 or more times in 2012. This category was dominated by Tedd Arnold (Fly Guy series) and Karen Katz's books.

Nap Time for Kitty
High Fives with Julius and Friends
Twinkle Toes
Spring is Here
There Was an Old Lady Who Swallowed Fly Guy
Fly Guy Meets Fly Girl
Buzz Boy and Fly Guy
Trouble at the Krusty Krab
Castle Under Attack
Mission to the Arctic
All Aboard!
The Amazing Spongebobini
Disney's Storybook Collection

Interestingly, only the last two books are cataloging on our regular picture book shelves. The rest are board books (1-4) or easy readers (5-11).

Chapter Books
All of these circulated at least 13 times in 2012.
The Diary of a Wimpy Kid series accounted for at least 140 checkouts. (Each title in the series was on my list, so I'm not going to type all of them)
Also:
Middle School, the Worst Years of My Life by James Patterson
The Last Olympian and The Lost Hero by Rick Riordan
The first three titles in Dork Diaries are all on this list
Wonderstruck by Brian Selznick Sleeper hit! Love this book but didn't realize it had been checked out so often.

Nonfiction (From Here On, to Be Known as The LEGO and Star Wars Section)
Minimum of 10 checkouts gets you on this list, along with all the Star Wars visual dictionaries that I didn't bother to list because You. Get. The. Idea.
How to Convince Your Parents You Can Care for a Puppy So many hilarious parent facial expressions/comments when faced with this book title
LEGO Star Wars (x2)
The Ultimate LEGO Book
The LEGO Ideas Book
The Avengers
The Star Wars Craft Book
How to be a Princess (Sadly not this princess by someone who I swear is NOT me)
The Princess Encyclopedia
Darth Vader
Pokemon Sinnoh Handbook

Graphic Novels
Basically we only need to buy books by Jenni Holm (Babymouse series) and Lincoln Peirce (Big Nate series) apparently. The only other title on this list was a Pokemon comic book.

Chapter Book Audiobooks
6 or more checkouts.
Adventures in Odyssey
Robinson Crusoe This was a surprise to me.
Dragon Rider
Diary of a Wimpy Kid
War Horse
Fablehaven
The Lightening Thief
The Son of Neptune
Geronimo Stilton (2)

YA Audiobooks
6 or more checkouts
The Hobbit
The Hunger Games
Catching Fire
Mockingjay
Hush, Hush by Becca Fitzpatrick
The Warlock by Michael Scott
The Enchantress by Michael Scott

YA Fiction
Beyond The Hunger Games trilogy titles, here are the others that circulated 13 or more times:
Matched by Ally Condie
Silence by Becca Fitzpatrick
Divergent by Veronica Roth
Supernaturally by Kiersten White Another surprise! I haven't read this or Fitzpatrick's, so I'll add them to my To Be Read Pile.

So where do we go from here? I will probably purchase an additional copy of many of these that are still popular. We have tons of Diary of a Wimpy Kid and Hunger Games books on the shelf as interest has waned locally.

What was the "most wanted" at your library this year? I expected most of these, but it's always fun to see the surprises.