on December 26, 2012
I confess to you, my brothers and sisters, that I have as many failures as successes as far as programming goes. Here, by reader request, is but a small sample:

Programs no one showed up for: 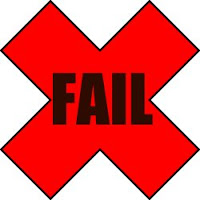 Programs that I failed to plan for SO! MANY! people to show up for:
Programs that originally got good numbers but drizzled out:
Paid Performers that didn't get nearly enough attendance to justify the speaker's fee, which isn't necessarily their fault, but still:
Overall, most of my programs go off well. There will always be something that doesn't work out as well as planned. A lot of attendance issue seem to stem from scheduling conflicts with the intended audience. So much trial and error trying to figure out what works with kids and then BOOM! a blizzard hits or the school system changes the official end time and you have to cancel or adjust.

Readers, what programs have been failures for you?
programs