on October 26, 2012
I made this far too late for the Halloween Extravaganza, but here is a fun craft stick  puppet version of "5 Little Pumpkins." You may know this rhyme already or have seen Kendra's flannel on glove version. 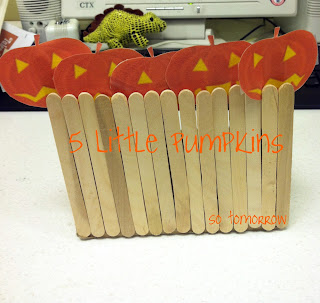 I used a old box we had lying around. It's a wee smaller than desirable, but a tissue box would be perfect. I'm trying to pretend that the overlapping pumpkins was a desired effect and not from making the clip-art too big. The craft sticks are hot-glued to the box. The pumpkins are laminated and taped to the same size craft stick. They are also taped to the inside of the box. Stay tuned for more craft stick puppets in the future!