on September 21, 2012
It has finally happened! I am running out of flannel fridays to post! In the immortal words of Scooby-Doo, "RUH ROH!" 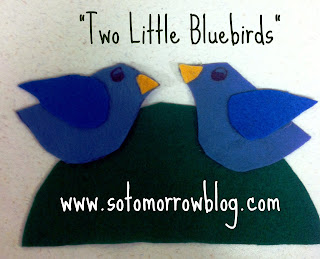 Today I am sharing "Two Little Bluebirds" also known as "Two Little Blackbirds," a felt adaption of the well-known fingerplay. If I recall correctly, the patterns are by Judy Sierra.

Look for the roundup from Sharon later.

P.S. Is it just me or does the photo look like an indie rock album cover? I think it's the font choice.
flannel friday flannelboard