on June 01, 2012
The Field of Boliauns is an Irish trickster tale I discovered in Flannel Board Fun: A collection of Stories, Songs, and Poems by Diane Briggs (Scarecrow Press, 1992). I meant to have this post up in time for St. Patrick's Day, and it sort of is, just for the 2013 holiday and not the 2012 one. 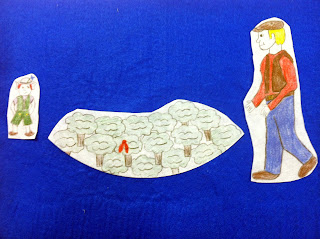 The story goes like this: A young man named Patrick encounters a leprechaun. Knowing that a captured leprechaun has to reveal the location of his pot of gold, Patrick forces him to do so. The leprechaun takes him to a large field of boliaun bushes. Patrick ties his red scarf around the bush covering the buried pot. He makes the leprechaun promise not to remove it and leaves to retrieve a shovel.

Upon returning, Patrick discovers that the leprechaun has tied a red scarf around all the bushes in the field. He tries digging at bushes he thinks might be "the one" but finds nothing. He resolves never to stop searching for the leprechaun and travels the rest of his life with the shovel. 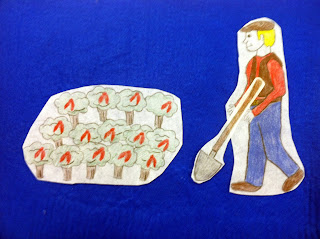 This is such a short story that it makes absolutely no sense to make it painstakingly out of felt. I used milk filters, but if you don't have any available to you, my suggestion would be to copy the pattern, color it, and then laminate. Stick some Velcro on the back and you'll be good to go.

This week's Flannel Friday is being hosted by my fellow Michigander, Lisa. Look for the roundup soon!
flannel friday flannelboard