Flannel Friday: Two of Everything

Today for Flannel Friday, I'm sharing my version of the folktale known as "Two of Everything." I used Diane Briggs's patterns from 52 Programs for Preschoolers, which is also the source of the words. I was able to get this book through ILL and I do not have a copy of the patterns, but Amazon has several used copies starting at $0.01. 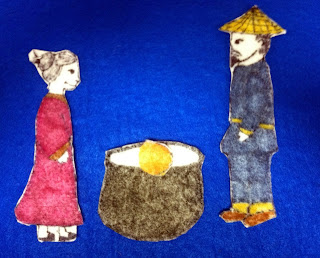 Essentially the story goes like this... Husband finds mysterious pot buried in his yard. He digs it out and drags out. He has a little trouble carrying the pot comfortably while also hanging on to his one gold coin, so he puts the coin in the pot. When he goes to retrieve the coin, to his surprise there are now two coins. 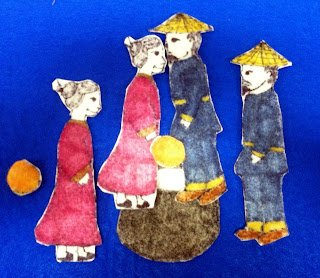 The new couple builds a house next door and they all live happily ever after.

Today's Flannel Friday is being hosted by the lovely Cate at Storytiming. (@storytimingcate on Twitter).