on April 07, 2011
I have shared some posts about my library's puppet shows, but I thought it would be fun to share the entire process so you can put one on too!You know you want to! We do puppet shows for spring and winter breaks. I have also done them to kick-off summer reading and we did a Halloween one this year. Our puppet shows are some of our most popular programs (second only to paid performers during summer reading and our big Carnival in the fall).

The basis for the puppet show's script is from Puppetry and the Art of Story Creation by Nancy Renfro. It is really a sketch that you can lengthen and embellish. Sometimes it helps to have the kernel of an idea to encourage you to be creative without being overwhelmed. In this script, two cooks argue over a soup recipe (hence the title "A Salty Tale.")

This is a fun puppet show because it has different special effects. The script is written to use bubbles (as the soup boils), baby powder (for steam), and a squirt gun (the fish in the soup squirts water at the chefs). It was easier for us to just use the squirt gun because we only had two puppeteers and limited room. The squirt gun is the only effect that the plot depends on, but you could rewrite that portion easily if you opted out of using one. Ours leaked all over the place also, so be warned about that.

You can't have a puppet show without a few puppets, so meet our stars: Joe and Leo: 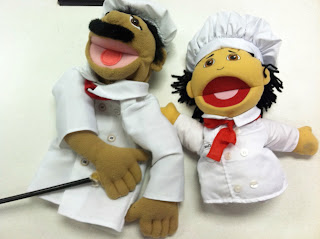 The script also calls for a fish (homemade with cotton ball stuffing and a felt body) and boss (vintage w/ homemade felt apron) for our two wacky chefs: 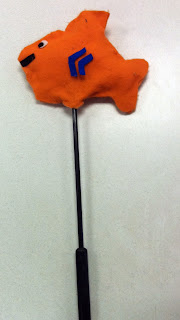 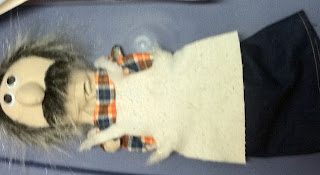 For props, we assembled some play kitchen accessories: a toy mixer, wooden spoons, play food, etc. to decorate the stage and add ambiance. The toy mixer we found at the local dollar store for $5! 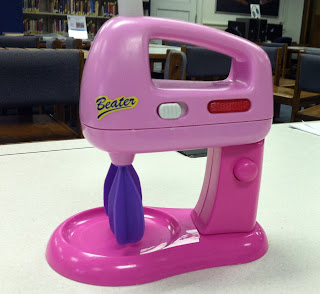 We purchased play food from Small World Living Toys and I highly recommend it. The pieces are just the right size to be viewable (and can be grabbed with puppet hands although I cheated and hot glued magnets to them) and are very attractive. I don't have kids of my own but you might have some toys lying around you can use as props also.

Here are some script adaptations and other general tips:
1-Changing references to the "boss" to the King/Queen, if you already have a royal puppet handy. We didn't do this, but it might save you a lot of trouble of trying to figure out how the heck to make a boss puppet!

2-Where the script calls for an odd assortment of items (jewelry is suggested) to be added to the soup, just use underwear. It will help if you add a line of dialogue spelling it out as underwear. Underwear is comic gold, I tell you. Comic gold. 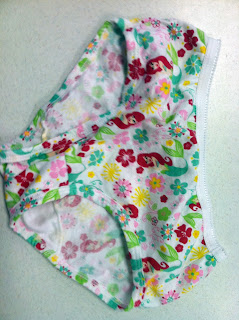 3-With the puppets we used, I had to figure out a way to get the smaller puppet to be able to drop food items into the soup pot. What I wound up having success with was ho tgluing magnets onto all the food and placing them into a small bowl which I velcroed (more secure than hot glue in this case) to a paint stirrer which was painted black. Then I was able to use my left hand to hold the weight of the bowl while my right hand was acting out the puppet who was "carrying" the bowl. This worked really nicely and proved that, indeed, the simplest solution is the best one.

Here is how it looks to the audience: 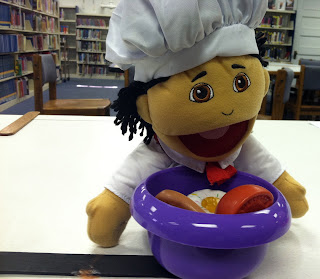 4-If you have a handy husband like the one I am blessed with (or are handy yourself), beg and plead for him to add a shelf to the back of your puppet stage. We should have done this years ago! It would have saved me so much trouble. Ours folds down so the stage doors can be closed for easier transport. (Our stage is huge. Massive. And has already been made even smaller in my tenure--my husband cut some of the width off the sides to make it more portable about a year ago.)

5- Pro Tip: Eat a good breakfast before you do this puppet show as all the food talk makes you hungry!

I also read The Very Hungry Caterpillar before the show so that the kids wouldn't get restless and latecomers wouldn't miss half the show. After the show, the kids get to come up and play with the puppets behind the big stage which is very exciting for them.


So there you have our version of "A Salty Tale!" Patron feedback was really excellent on this and attendance was off the charts (146 people at 3 shows). I'm going to go take a nap now!
programs puppets