on April 28, 2011
I noticed that others have been posting overviews of their storytime programs, so I thought I would share ours as well. I do one weekly storytime for preschoolers Tuesday mornings at 11 during the school year at my main branch and also Friday mornings at our other branch. We do 6-week sessions in fall (October-Thanksgiving), winter (January and February), and spring (March-April). We also have a 6-week storytime session during our summer reading program.

During the summer, I do five storytimes each week at different locations: a city park on the river, 2 elementary school lawns, in the library, at our other branch. Down by the river is my favorite (don't worry, we're actually quite a lot further than this where we do our storytime): 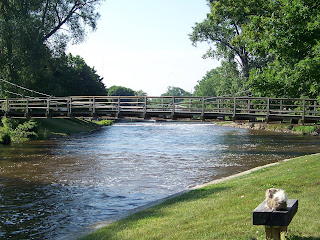 We don't have a program room at either branch so both storytimes are in the children's section. In my main branch, that requires moving a lot of furniture. We also have steps to look out for (which lead up to a stage that houses our picture book collection). Generally, I put my felt board easel on the stage and either stand or sit to read to the kids, depending on how many kids there are or what I feel like that day.

We usually have about 30 people for storytimes during the school year. The summer varies a lot more--anywhere from one family to about 60 people at a storytime. I am partial to the summer ones because we are outside and we often have a good sized-crowd so we can get a little more rowdy.

All of our storytime programs are unregistered. The only time we register for a program is if a performer requests the crowd size be kept to a certain limit. This usually only happens with live animal programs. Since we don't have a seperate storytime room, it would be difficult to keep people away anyway. And it is my philosophy to tell people "YES!" as much as possible.

For opening activities, I usually start by saying "Good morning" and waiting for someone to say it back. Often this is less than enthusiastically met so sometimes I have everyone repeat it a few times. We should probably start providing coffee.

After everyone has been sufficiently loud at wishing me a good morning, I have the kids stand up and we do "Jump Up, Turn Around" by Jim Gill. We usually have a much smaller crowd at the other branch so I use "Open Them, Shut Them" instead. (That's also how I begin my toddler storytimes.) 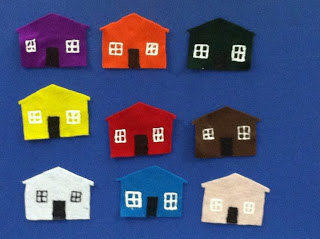 Then we do an action rhyme called "Let's Hear You Roar Like a Lion" by Diane Briggs. It goes like this:

Then I read some books. If I notice the kids are particularly wound up, I'll have them do another dance like "Silly Dance Contest" by Jim Gill. I usually play music off my iPhone--in airplane mode so I don't get a phone call-- (connected to a portable speaker set) so I can sub different things in very easily.

After I'm done reading, we sometimes do a game or activity. The most popular one is our parachute. It is tricky in our space because we have a lower ceiling and the aforementioned steps. But the kids really love it.

Then, we either do a simple craft activity or a coloring sheet. I'm thinking we will most likely switch to take-home crafts because of space concerns. Our storytime has grown in attendance tremendously since I started and we are running out of room. For staffing purposes, we can't easily add another one.

I'd show you some pictures of my storytime area/youth department, but we are hopefully going to be repainting it soon, so I will save that for a future makeover post.
storytime