on December 01, 2010
I've blogged about my library's puppet shows before, but just to catch you up, the youth services staffers here have been performing puppet shows for decades. Our puppet shows are extremely popular and one of our most reliably-attended programs other than storytimes. I really enjoy the creative and technological challenges involved in staging them and always look forward to the next production.

I'm required only to do puppet shows during winter and spring breaks but I have taken to the idea of doing them seasonally. In the summer, we kicked off the reading program with "Under the Sea Stories." I chose 3 short puppet scripts and wrote introductions to them delivered by a pirate puppet.

For Halloween, we performed"The Princess & The Pumpkin" which is a twist on "The Princess & the Pea" written by Marilyn Lohnes. I originally intended to write an additional scene but ran out of time. I'm a big fan of Lohnes' books (Fractured Fairy Tales, where this script is from, and Storytime Puppet Zoo, my favorite)  because they include very simple puppet patterns which you can make in sew or no-sew (hot glue) variations. I hope she will write more!

There are six scenes in Lohnes's original script. I decided that the script necessitated 3 backdrops for how I wanted to stage it, but you could probably get away with one or two, depending on how you used props or relied on the audience's imagination. The play begins with a stormy night, continues in a bedroom, and then concludes on the next morning. I decided I want to show the exterior of the castle for the first and last scenes, and the interior for the bedroom.

First I sketched a basic idea of what I wanted my backgrounds to look like and then I looked to see what was available on the cartridges I already owned. Turns out, it was a lot, especially when you use a little creativitity and think about how else shapes could be used. Then I selected paper and made the cuts and assembled the backgrounds. Take a look!: 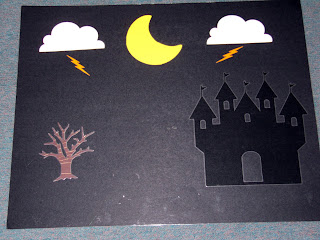 Second backdrop (Inside a royal bedroom): 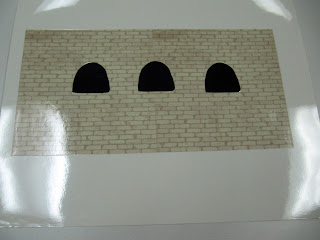 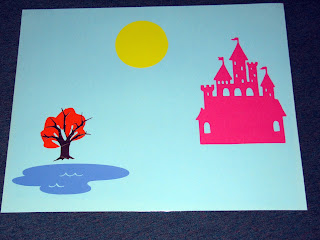 We just use posterboard for the backgrounds. I like that it is a hand/homemade approach. As a point of pride, I try to make as much of our materials as time allows. The look is less than polished, but we are not professional puppeteers either! My motto is "It doesn't have to be perfect! It just has to be done."
You could also use a Cricut to make puppets of paper or fabric, if you have the deep-cut blade. I would love to do The Nutcracker sometime, using the Paper Doll Dress Up cart for the puppets.
cricut puppets