How to Perform Library Puppet Shows Simply and Cheaply: A SoTomorrow How To

on April 02, 2010
The library where I work has a long tradition of performing puppet shows. Before I started here, I had very little experience in puppetry, but I have had an absolute blast putting these shows together. Our spring series runs next week, and I am already looking forward to our winter series during winter break.

Each show I have done, I have tried to make a little bit more elaborate than the previous one. The first one was only three months after starting this job, so I was still adjusting and wasn't quite sure where to begin. One thing I knew I didn't want to do was use other people's recordings (such as audio-books). Copyright legalities aside, I felt that if we were presenting a puppet show performance it should be as much of our work as possible. While we continue to use royalty-free scripts, in the current show I have actually written an original rap piece to be performed by a rapping-pizza-delivering walrus. I recorded my own voice for the walrus, then lowered it using our recording software program, Audacity (see audio section for more information on this program).


First Things First: Picking the Script
I strongly recommend that in a library setting you use scripts that are based on folk & fairy tales the children are likely to be familiar with, or that are twists on such stories. The three shows we have developed under my tenure are The Three Little Fishies & The Big Bad Shark, The Little Red Hen on the Farm, and The Tortoise and the Hare. All of these are scripts by the wonderful Marilyn Lohnes.

The Tortoise and the Hare is the first script we will have performed where I changed the lines somewhat, just to make them more clear or to fit our own adaptation better. Do not be afraid to do this! It is all about making the show your own!

Can You Hear Me Now?: Free Sources for Audio Elements

At the time I began performing puppet shows, I did not know of a free way to record our own voices, so we performed it live. As those of you who have worked with puppets know, it is difficult to manipulate the puppets while also acting out the script. It became even more difficult when I came down with strep throat and missed the last day's performances! A sweet soul of a co-worker filled in for me as the show must go on! But lesson learned, for the next show, we recorded the voices with staff volunteers and myself as actors. It was much easier. We continue to record, and I have now found an Internet source of shareable background music that I have incorporated into and between scenes. It definitely gives it a more professional feel!

The software we use to record the show is a free, open-source program called Audacity, available for Mac, Windows, and other operating systems. I love Audacity, but it definitely has a bit of a learning curve for those who are unfamiliar with open-source software solutions, and especially those who have never mixed audio before. It is a lot of fun to experiment though!

A little note about using Audacity: If you want to be able to export tracks from Audacity as MP3 files, you will need to download an encoder appropriate for your operating system. You can read more about why this is and where to find a Windows encoder, for example, here. I downloaded the Mac encoder and successfully installed it, allowing me to open the tracks I record in iTunes and then either sync them with my iPod or burn to a CD. You will only have to install the encoder once.

If you are recording a show with several people's voices, Audacity will allow you to record them all at once or as individual tracks. We have been using the first method to record our shows, but will be attempting individual recordings with our next show in the winter. I believe that will eliminate a lot of issues with some people's voices being closer to the built-in microphone in my computer as well as the issue of background noise from other people in the room.

Another way we have improved our shows is with the use of backdrops. At the first show, we only used one backdrop. It was all we really needed with the script, but in my opinion, one of my favorite elements of theatrical performances is set design. So for our last puppet show, I started making my own. We already had a number of backdrops in storage which someone had clearly lovingly drawn on fabric. Unfortunately they appear to have been drawn in colored pencil and are quite faded. They are also extensively detailed, making it difficult to simply redo the coloring. 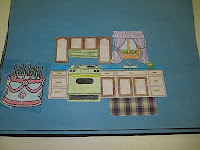 Not considering myself an artist and definitely wanting to create several in a relatively short amount of time & with available supplies, I hit on the idea of using a combination of posterboard, coloring pages downloaded from the Internet, leftover fabric from an upholstery sample book, die-cut scrapbooking paper, and construction paper to create our backdrops. The use of construction paper and posterboard really gives the backdrops a colorful, kid-appealing flavor. Using coloring pages allows me to have very detailed scenes (such as this kitchen scene) without me needing to spend hours to draw them. I simply enlarge the images on a photocopier and glue them to the posterboard. 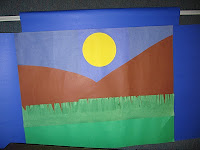 The die-cut pieces have been a life-saver for simple shapes. Instead of needing to find something to trace for a perfect circle, for example, I just found a yellow circle and instant sun and voila!

Generally, we use one sheet of posterboard for the main part of the backdrop and then cut another piece or two into pieces attached to the first to run the width of our stage. You could also simply hang a sheet or fabric behind each posterboard backdrop, but as we need to change several backdrops (4 in the current production) quickly, this works well for us.

Working with Animals: Cheap, Free, and Other Sources for Puppets

The easiest source for puppets is to buy them from Amazon.com, a toy store, or any number of other companies. I have puppets in my own personal collection from Oriental Trading Company (the quality is hit or miss) and Discount School Supply (which I particularly recommend). Of course, good quality puppets are expensive, so unless you have a large budget this option is probably out. My library has a somewhat extensive collection of puppets as they have been an important part of our programming for many years.

There are lots of ways you can make puppets. Probably the easiest is to use a stuffed animal and remove some of the stuffing, if you can stomach it. You could find cheap stuffed animals at garage sales or thrift shops or ask co-workers if they have any to donate to the cause.

Other options include making them. Some books with scripts for libraries to use include patterns for sewing or gluing puppets together out of felt or other fabric. It is a lot of fun to make puppets this way, and is a good task if you have pages or volunteers who need something to do.
programs puppets