How to Make a Scroll Story

This post is semi-inspired by Abby the Librarian's excellent How to Make a Felt (Flannel Board) Story and Lisa Chellman's Magnetic Manipulatives for Storytime.

Scroll stories are a great, unusual method of storytelling. Even today's kids, accustomed to video games and TV, will sit mesmerized and listen to a scroll story. Bonus: scroll stories are also quite a lot of fun to make! You can write your own stories or use traditional stories.

Scroll stories are wonderful practice for beginning storytellers because you are able to have a copy of your script near (for those not yet confident in their memory) and because the eyes of those in the audience will be focused on the box (for those not yet comfortable performing). 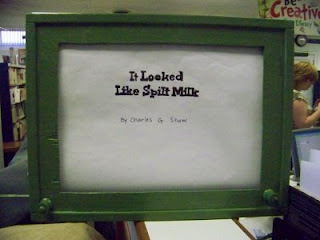 I made my first scroll story earlier this summer, a version of It Looked Like Spilt Milk by Charles G. Shaw. I know lots of children's librarians use Shaw's story as a felt/flannel board. Other stories that you might have used as felt stories will probably work well as a scroll story too.

Here are some steps for creating a scroll story of your very own!

1. This is the hardest part: finding a story that works for this method of storytelling and that you like enough to learn to tell yourself.Here are some that a previous Children's Librarian at my library had made (many of these were made years and years ago, so if you don't recognize the titles, that's OK! I had to ILL quite a few books whose scripts had been lost to see if I wanted to use them.):

* The Witch's Christmas by Norman Bridwell
* Clickety Cricket By Garry and Vesta Smith
* Clifford, The Big Red Dog by Norman Bridwell
* Fish is Fish by Leo Lionni
* I Had a Little by Norma Levarie
*Leo, The Late Bloomer by Robert Kraus
* Whose Mouse Are you? by Robert Kraus
* Is Milton Missing? by Steven Kroll and Dick Gackenbach
* Tim Tadpole and the Great Bullfrog by Marjorie Flack
* Harold & The Purple Crayon by Crockett Johnson.
* Willie Waddle by Katharine J. Carter

2. Write a script for the story, as you won't want to try and manipulate the dowels in the story box at the same time as you are reading the picture book. 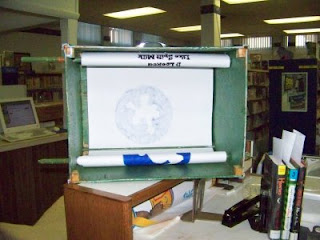 Build the story box. You will need four dowels (2 skinny and 2 fatter ones), and some plywood to frame the box. I also recommend screwing a handle into the top to make carrying the box easier. You will need to drill 4 holes in the left and right sides for the dowels. The skinny ones will be closest to the screen and hold the story straight and the thicker ones in the back are the dowels the story is wound on.

Mine almost looks like it was fashioned out of a wood filing cabinet, if that gives you a good visual. I repainted the one I found in storage with some leftover paint, so that is why it is hardly a perfect paint job.

Jayne Payne has more specific instructions on using cardboard box stories in the classroom. The Church of Jesus Christ of Latter-Day Saints also has some instructions for using roller boxes to teach religious stories

4*. Using fadeless paper, prepare the paper for the story to be drawn. Buying a 50-foot long roll of paper gave me enough paper to create two stories. You will most likely need to trim some of the width off to fit your box.

5*. Mark out the dimensions for each picture (I think of them as "slides".) For example, the size of my screen is about 15" wide and 11.5" high. I also left a 2" gap in between frames or slides of my story so that both pictures would not be visible to the audience at the same time. This also heightens the dramatic effect.

6. Once areas are marked off, draw your story! Have fun! 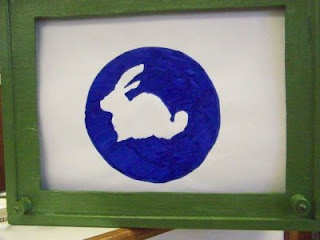 *Make sure you have plenty of room to unroll the paper to measure, cut, and draw!

If anyone has suggestions for a scroll story that they'd like to see, let me know! I am itching to use my other thing of paper!
storytime